Sexual expression is an essential component of healthy human development (Freud, Maslow et al as cited by Zimbardo 1992). However when this expression happens in an unguided manner in young adolescents, the result is the high rates of pregnant teens and teen moms.

Objectives / purpose of the forum

WHW used this opportunity to

Between July and October 31, 2015, WHW organised three separate platforms for sexual reproductive health for girls aged between 15 and 19 years in three Senior High Schools in the Kwabre East district of the Ashanti region. The district is a focus district for WHW programs and also noted to be a district with a high prevalence of teenage pregnancies and high school drop out rates for girls in both Junior and Senior high schools.

The nurses and nutritionists from the Ghana Health Service, the adolescent programme officer from Marie Stopes International and the district officer in-charge of girl child education in the district assisted WHW.

Find below the schedule and numbers of girls who attended each session.

A total of 1397 students and 24 teachers in three schools attended the three sessions that covered a total of 11 hours. The highest attendance was recorded at the Adventist Girls Senior High School and the least at Simms Senior High School. However the observations and findings were similar in all the schools visited.

The girls were given the opportunity to pose questions to the panel. The questions covered a variety of topics from menstruation, sex and sexually transmitted infections (STI), through contraceptives to the issue of sexual abuse by some guardians.

Several students also interacted with members of the panel on a one-on-one basis after the forum to seek guidance on highly personal issues. Girls with STIs in Simms and Adventist Girls Senior High School were referred to the Marie Stopes centre for management. In Antoa Senior High School , WHW organised a medical outreach session a week later to attend to 57 girls who had STI. 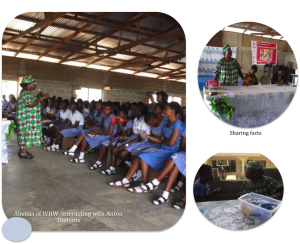 All cases of infection were given treatment by the medical team that day. The findings conveyed the urgency of having a school nurse on the compound and also starting a Girls Club to assist address the issues of inadequate knowledge on responsible sex behaviour.